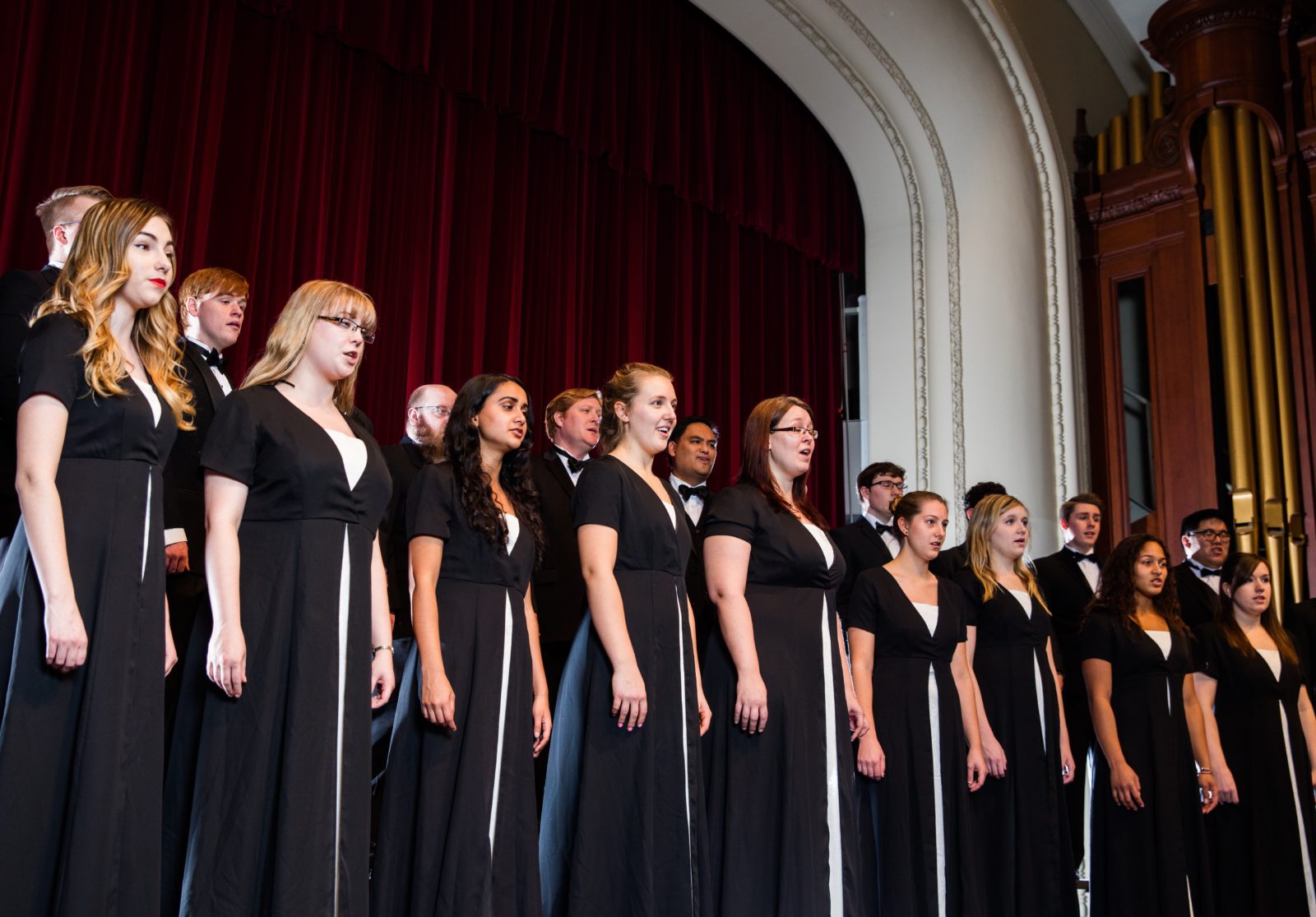 The University of Alberta Madrigal Singers is comprised of 20-40 auditioned singers from across the North Campus of the University of Alberta. The ensemble was formed under the direction of Dr. Larry Cook in 1974 with occasional performances through the early 80’s. From 1982 to 2019 the Madrigal Singers was led by Dr. Leonard Ratzlaff and emerged as one of the foremost university chamber choirs in Canada. Under the direction of Dr. Timothy Shantz starting in 2019, the choir continues its tradition of excellence through performances and collaborations throughout the university, faculty and the community. Frequent first-prize winners in the CBC's Choral Competition for Amateur Choirs, the Madrigal Singers have also had several successes at major international competitions, including first prize at the Robert Schumann International Choral Competition in Zwickau (1995), third prize in the 5th International Chamber Choir Competition in Marktoberdorf (1997), first prize in the International Choir Competition in Cork, Ireland (1999), and the International Jury Award at this same competition in 2008. In 2017 the Madrigal Singers were invited to participate in a festival in Athens, Greece, together with several choirs from the US, under the direction of esteemed British choral conductor Simon Carrington. The choir presented three independent concerts in Athens.

The Madrigal Singers have frequently been recorded by the CBC for regional and national broadcast, and have appeared as guests of the Edmonton Symphony Orchestra, performing Ravel's ballet music Daphnis et Chloé and Handel's Messiah. In 2005 they appeared with renowned Canadian soprano Isabel Bayrakdarian. The Madrigal Singers are also regular guests of the Alberta Baroque Ensemble, appearing on that ensemble’s annual Christmas concert. They have participated on four occasions in University Voices, a festival of Canadian university choirs sponsored in Toronto by Soundstreams Canada, performing under the direction of European conductors Robert Sund, Tõnu Kaljuste and Kaspars Putninš. The Madrigal Singers were invited to perform at the National Convention of the American Choral Directors Association in Los Angeles in 2005, and in November 2007 they performed as guests of the Royal Society of Canada’s Installation Ceremony at the Winspear Centre for Music. In 2010 they were featured at Podium 2010, the biennial conference of Choral Canada in Saskatoon. Recent activities include a performance and workshop at Music Conference Alberta in Red Deer in 2017, and a tour to Calgary and Vancouver in Spring 2019.

Each member brings his or her personal medley of vocal and musical abilities to the choir. We believe in encouraging each member to contribute his or her unique vocal quality to create a unified, choral sound.

One of the goals of our practice is to bring our diverse abilities into focus in our study and performance of a wide variety of music.

Our further objectives include:
• enhancing our members’ appreciation of and skill in performing choral music through exposure to and instruction in a wide variety of choral styles
• fostering and maintaining amongst our membership a high standard of choral performance
• promoting of concerts and tours which are deemed stimulating to choral achievement
• making capital expenditures with the end of enhancing the performance of the Madrigal Singers

The Madrigal Singers have always strived for excellence both musically and as a choir. We believe it to be an honour and our duty to promote choral music through our role as representatives of the University of Alberta and the city, province and country to which we belong.